Anne Frank: The Diary of a Young Girl

I remember the first time I read this. I was in 4th or 5th grade at the time, and though I was a pretty mature-minded tween, the diary of Anne Frank was just another book that I couldn’t put down. I didn’t correlate the fact that the words in my hands, though edited, were the words of an actual human being. A human being who happened to be going through the worst imaginable circumstance. To my tween self, I was relating to the average diary-writing, family squabbling, worrying teen on the pages. More than 10 years later, I happened to be watching a BBC broadcast about the Annex that Anne Frank made so famous, and there was an interviewer asking people why they decided to take the tour. Most said it was for the history, but others has family stories similar to Anne’s, and came to, in a way, pay their respects to Anne for telling her story. This motivated me to seek out Anne Frank’s diary again. 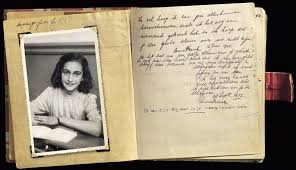 While I’m sure there isn’t a single reader out there who hasn’t heard of Anne Frank and her life in hiding from Nazi Germany during World War II, I’ll refresh your memory on the details.

Anne, the youngest of the Frank family, went into hiding with her father (Otto), mother (Edith) and sister (Margot) on July 5th, 1942. Along with the Frank family, there were four others in hiding with them: The van Pels family (or as Anne calls them, the van Daan family) Auguste  (aka Mrs. van Daan), Hermann (Mr. van Daan), and Peter (van Daan); and Fritz Pfeffer (aka Albert Dussel). The hidden Annex was the top two floors of the office building where Otto Frank worked. They stayed in hiding for over two years, aided by Mr. Johannes Kleiman, Mr. Victor Kugler, Miep Gies, and Bep Voskuijl.

Two years. Two year inside, never being allowed outside, always having to be quiet, living in fear of being found out and sent to their deaths. Two years of living off what you have and what others could supply you, being entirely dependent on the good will and bravery of those keeping you safe.

What impresses me more now is how much you see a change of maturity in Anne during her time in the Annex. In the beginning, she is so much a child, optimistic and unsure of what is happening around her, but thinking of it as an adventure (even though she understood the urgency of the situation). Her constant mentions of the household bickering and drama are silly in comparison to the reality of 1942. Towards the middle of her diary, you start to note the change, and to which I believe her focus in her diary changed from a personal confidant to more of a detailed account of her reality for an eventual audience. She explains what is happening, how they live in hiding, what keeps the family optimistic, what frightens her the most. Towards the end, (and such a sad, haunting end to think about), the reader and Anne have truly identified the complex human that she, and her grasp on the world in which she was shut away from, impressively informed and ruminated on.

Reading this as an adult versus a teen has changed my perspective on Anne, but not for the worse. It most certainly deepens my respect for her and her Annex family, with additional deep sympathy for Otto Frank, as the man who outlived his young family, lived through the horrors of concentration camps, and then returned to find his youngest child’s last accounts of her life. To be so brave and optimistic at a time when the world was at it’s darkest…

If you haven’t read it, you must, because it’s the least you can do in her memory.

What Makes it a Classic?

This novel is considered a classic because it is one of the most personal and detailed accounts of those affected and of Jews in hiding during WWII. For a child to create such important documentation… I don’t know how it can be more obvious that reading this memoir is such a vital piece to understanding the tragedy that befell those overpowered by Nazi Germany.

TL/DR: Anne Frank: A Diary is a first hand personal account of the Frank family and their friends who went into hiding during the German Occupation and outbreak of WWII.

Recommend it? Yes, but even though it’ll tear your heart into a million pieces.

Buy it? YES. Mostly because it could take a long time to read, and you need to be in the right mood for it, so borrowing a copy isn’t exactly ideal. Also, once you’ve read it, you’ll want that story on your shelves forever.