Home › Book Review › The Tattooist of Auschwitz by Heather Morris

The Tattooist of Auschwitz by Heather Morris

As much as it hurts my heart to read about anything that happened in the German concentration camps during World War II, I am always fascinated by stories of the survivors- fictional or not. To me, hearing about that much faith and will to live fills me with hope, strength, and respect. The Tattooist of Auschwitz gives readers another view point, through the eyes of Ludwig “Lale” (pronounced like “lolli” of lollipop) Sokolov.

The book starts off with Lale’s arrival to Auschwitz, where they are told “work will set you free”, and Lale is tattooed prisoner #32407. He’s a Slovakian, but he speaks German, Russian, Polish, French, and Hungarian. Seeing how clever Lale is, a Frenchman named Pepan takes him under his wing, and even nurses Lale through a case of typhus. Pepan requests Lale to assist him, the tätowierer. Lale is horrified at the idea of branding these men against their will, but he also understands that this job keeps him out of doing worse jobs, or even more so, from death. 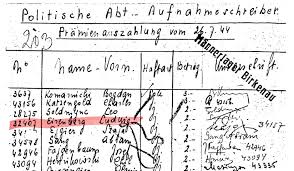 In this position, Lale is considered working for the SS, and though a Kapo guards him, he is given his own sleeping quarters, extra rations, and free time, unlike other prisoners. He was taught survival strategies from Papan, such as how to keep out of the way of the Kapo’s pistols by keeping his head down and his mouth shut. He also shared his extra rations with his bunkmates, and eventually Lale gets the women of Kanada (where everyone’s possessions are sorted through for valuables and goods) to sneak items like jewelry from the stash, so that he could pay a local workman to sneak in extra food and medicines.

As the years slip by, Lale cannot help but dream of women, of their beauty. He was always a ladies’ man, a terrible flirt. Then one day, women are forced into the camp and made to be tattooed by Lale, though he cannot stomach the idea. He opposes defiling these women, but he knows he will have to, or he and the women will be killed. Then, he must tattoo a particular woman- #34902. He vows that he will protect this woman, that he will do anything for her to survive, and that one day they will marry after liberation.  It’s a lofty dream, and the woman, soon to be known as Gita, isn’t sure they will survive to live it out, but she quickly finds herself falling for this man.

He smuggles her extra rations, and sneakily delivers letters to her, and occasionally manages to meet her outside her bunk, desperate to prove his love and give her hope. But when she is put on a list to transfer out of Auschwitz, Lale must watch the love of his life leave him- and wonder if he’ll ever find her again.

I think it would be difficult to tackle a love story in Auschwitz, but Morris does so with absolute grace. Throughout the novel, the reader understands that this man only has eyes for this woman, and despite the absolute darkness of the concentration camp, she becomes his beacon of light.  What I find even more amazing is that this is a true story, and that Morris worked with Sokolov over the course of three years, letting him relay his story. Though the setting and many scenes within are upsetting and even shocking, the love between the couple is heartwarming. If you’re looking for a historical WWII read, this is a great choice.

TL/DR: The Tattooist of Auschwitz by Heather Morris is a true love story of a couple who met while prisoners in the Auschwitz concentration camp, and the man who tattooed many of it’s captives.

Read it? Yes- though it’s emotionally difficult to read.

Recommend it? Yes, definitely a good read for the fans of WWII historical fiction.